Since the summer last year, at the invitation of a great women's association here in Alcala, I've been giving Zentangle classes on a Friday evening. I think we have around 25 people, mainly women, who come regularly, either to the beginners or the advanced classes, I often leave the house feeling quite tired after a long week, but invariably, I am rejuvenated when I arrive home a few hours later.

Al azar is a 'Spanish' phrase which I recently discovered and which has made my Friday evening's teaching SO much easier all of a sudden. 'Azar' is not originally a Spanish word, as you may imagine. It seems to originate in Persia, is found in Arabic (which is probably how it entered Spanish) and is quite common in Hebrew too. It can mean chance, fate, bad luck, 'Al azar', however, means randomly, frivolously or by chance. This is the meaning I need in my classes.

The point being that I became ridiculously excited when I discovered this phrase, because my alternative was a very long word that I could never remember...aleatoriamente ....but which I need to use very often during the classes to explain - 'make random dots on the paper'. Random is one of my favourite words - and indeed, concepts. Doing or thinking things 'at random' sparks my imagination and can set me on a wonderful path of discovery - finding something by chance is so exciting. It's one of the things I love in teaching and in my drawing. You never know where you'll end up or what you'll end up with.

It's how writing my blogposts go. I sit down with an intention in mind but many of my posts take a direction of their own at the production of a random word that triggers a set of thoughts.
I'm labouring the point. I'll stop.

I was on my way home today from taking Romy to a friend's birthday celebration. It has been raining quite a lot in the past couple of days so I was quite surprised to see a neighbour out and walking up the hill, still at some distance from her house. I stopped and asked if she wanted me to take her home, but she grinned and said no, she liked walking in the rain. She was wearing her dressing gown. Couldn't see her feet. But she did look very happy! Just thought I'd share.

A couple of weeks ago now, the wife of Edward Bond died. Edward is FR's guide, mentor and friend and he knew Elisabeth personally. At random, he opened a book of Bond's poetry a few days later, only to find the poem, 'She died'. FR was genuinely moved by this chance occurrence.

Strange random things sometimes encourage us to look for patterns in life. I'm not saying we always find them but there is a sense of reassurance for me that today - 4th March - is the birthdate of my great grandmother and FR's father. And that both our sets of parents got married on the 10th June - which is also the birthday of my oldest and closest friend. They make little links in our lives. Randomly, of course. 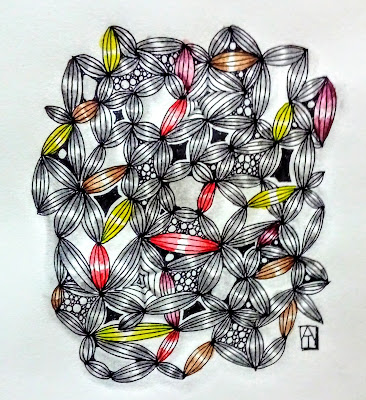 This is the pattern that sparked my need for the word 'random' in Spanish. It starts off with a set of random dots on the page which are then joined together with five lines. So simple and so effective - I use it sometimes with my English students if I ever get on to the subject of tanglin...by chance, of course!

Random questions make great conversation topics in my English classes. It's incredible how an unexpected question or statement can spark several memories or thoughts in people's heads. No need to worry about a language barrier if people really want to speak. Recently one of the best random questions was 'How would the world be different if animals could speak?....It really got my 13 year old students talking and made many of them think deeply about eating meat, visiting zoos and protecting the environment.

Quite out of the blue, I got a message last night from my nephew, Will. Several years ago, I bought him a wooden box for his birthday. It had a dragon on it and it caught my attention for him as he often uses the name 'Wishdragon' when online - a lovely name in itself - so the box seemed perfect. Being Will, I suspect he was a tad bemused at receiving an empty box but it made him think how he could put it to use. I am so delighted with what he came up with...a musical box, complete with the roll and beautiful tune he composed himself. Hope you enjoy this.


I will randomly end at this point, stopping only to say - do share any random thoughts or ideas you might have at this moment!

Email ThisBlogThis!Share to TwitterShare to FacebookShare to Pinterest
Labels: about me, random, Will, words, zentangle

I welcome your comments - it makes blogging even more fun to know someone is reading! 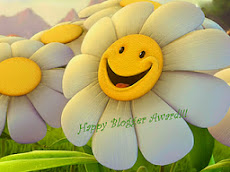 From Ayak - received with thanks!